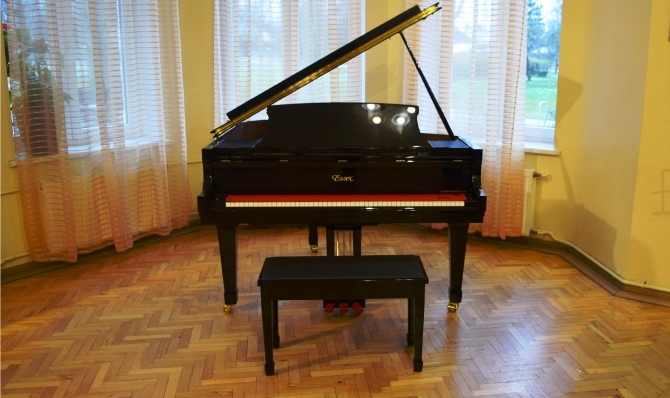 On October 31st Essex EGP-173C grand piano was installed in Musical School of Baldone. You can check out more pictures of how the piano was set up in our gallery.

Essex EGP-173C grand piano is built in classic Sheraton style, which was first introduced by Steinway & Sons in 1900 and has proven the test of time ever since!

Due to its white color and spectacular architecture, the White Castle is one of Baldone's most beautiful buildings and most remarkable objects. The building began in 1890 but was completed only in 1901. The castle was built for seignior Adam Mickevic as a hunting castle and has been named after the white color.

During World War I until the end of 1915 a Russian Army Hospital and later a German Army Hospital occupied the castle. After World War I the lawful son of Adam Mickevic - Nikolai and his family settled in the castle and rented part of the premises to Baldone resort guests. In summer 1936 and 1937, the premises were rented to the Latvian Society for the fight against tuberculosis and the castle hosted 45 impoverished gymnasts suffering from tuberculosis. Subsequently, a children’s shelter was moved from Kurzeme and arranged in the castle

Between 1945 and 1980, the first department of the Baldone sanatorium – women’s department was in the White Castle. It accommodated 75-80 visitors per month. In 1980, the White Castle became a hospital property. The hospital did not use the premises, but the local kolkhoz “Baldone” set up there their dormitories for builders and guest workers.

In 1985, the Baldone Music School was officially founded in the castle and later in 1993 also the Music Elementary School.

The White Castle also has its own ghost. Those who have experienced it say that the ghost is very active but kind-hearted. The ghost becomes active at night and late in the evening, so it is most commonly felt by cleaners and those who leave the building late in the evening. The ghost turns over the sheet music pages during piano playing, creates different sounds and moves objects, during late autumn evenings it walks around the park. There is no historical evidence of what might have caused the appearance of the ghost if only the fact that in 1915 in the building was an army hospital.